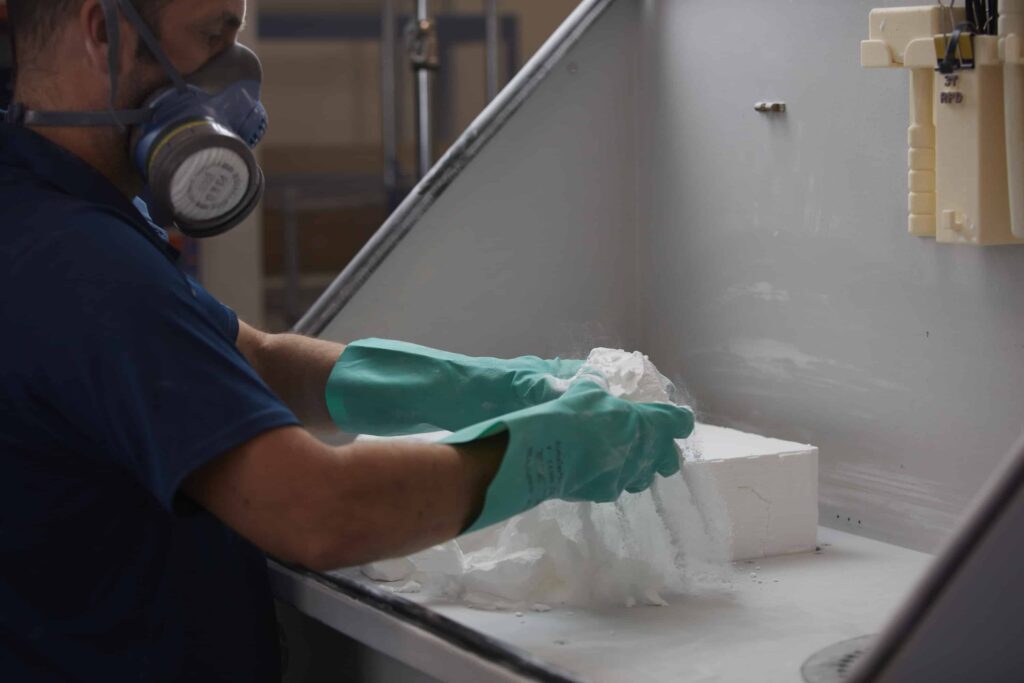 Selective laser sintering is undoubtedly one of the most impressive 3D printing processes.

The process leads to optimized geometrics and intricate designs, but a lot of thought had to go into the process regarding the material, design, and more.

So what does the full selective laser sintering process look like?

What Is Selective Laser Sintering?

Selective Laser Sintering (otherwise referred to as SLS) is a powder-bed process for producing metal or polymer parts.

The selective laser sintering process consists of material in powdered form that is evenly spread out on a power bed and heated with an energy source, in the form of a laser beam, to fuse the material together. This is done layer by layer, creating the shape of each slice of the component to build a 3D model.

The material is laid across a powder bed and heated to just below its heating point with a laser. The material under the bed is selectively solidified and an additional layer of powder is then laid on top of this material.

This additive manufacturing process sinters powdered material autonomously, targeting the laser at locations in space specified by a 3D model, thereby fusing the material to form a solid structure. It's a rapid prototyping tool that takes 3D CAD data and transforms it into intricate, durable, good-quality parts quickly.

Many compare it to direct metal laser sintering. However, it is worth noting that the two are technological variations of the same concept.

Here is what to know about the selective laser sintering process, including the CAD modelling, the actual printing process, and the post-process finishing involved.

As mentioned above, the selective laser sintering process isn't simple. There is a fair bit that goes into ensuring that not only will SLS produce high-quality parts but that the technology also adds value and new features. Here is a brief overview followed by a detailed look at the different stages of the process:

The 3D CAD data is initially separated into thin layers or cross-sections to begin the process. The data is then delivered to the SLS additive manufacturing equipment. Here is where the initial layer is made. A thin layer of the powder is distributed across a surface by a leveling roller inside the build chamber.

Using a CO2 laser, the material's cross-section is traced. The material is heated so it can fuse together as the laser scans the surface of the first layer. The powder bed gets lowered to allow space for a layer once one has been finished.

Unused material doesn't go to waste as it is repurposed as more is spread out and smoothly rolled after being supplied from the powder cartridge. Layer after layer is added, and the process is continued until the part is produced. Unused powder surrounds SLS parts as they are constructed, adding additional strength and removing the necessity for support structures.

CAD software is necessary for the SLS process, and designs should ideally be generated in 3D solid form. A product or part can be visualized, and its viability as a functional unit can be evaluated using 3D CAD modelling.

There are several CAD software used in the selective laser sintering process, such as:

To better understand what selective laser sintering can create, this modelling is also used to check the attributes of the design. The standard STL CAD file format, exported by most 3D CAD programs, is the foundation of the SLS process, just like it is for other RP techniques. As mentioned above, the 3D CAD data is first separated before it can be used in the SLS process.

One or more STL files can be imported by the program, and users are free to resize or orient the components as required. The automatic nesting features of the 2500 systems arrange multiple pieces in the build chamber optimally for optimum processing efficiency. The models are created straight from the STL files when the processing parameters have been defined.

There are several other file extensions used for 3D Cad parts:

Several important parameters come into play. This is because the final part is impacted by some elements during the selective laser sintering process. The primary laser parameters are:

However, there is insufficient experimental data or computations to link all the parameters to the process, despite a good number of them impacting some parts of the finished product. Furthermore, some parameters are not always programmable. The three main parameters that can be adjusted for the laser system are typically the power of the laser, hatch distance, and the speed of the scanner.

The laser system, spreading rollers and blades, and powder bed makes up the fundamental selective laser sintering processing system. A laser plus a scanner are both parts of the laser system. The laser beam must be concentrated onto the surface of materials and its heat is then soaked up by them, so they heat and melt.

The laser typically moves in a 2D plane thanks to the scanner. A roller or scraping blade is frequently used in the spreading system in addition to a slot feeder to disperse fresh powders so the surface can flatten.

The SLS production aspect of the process begins by coating the print area with a layer of powder. Using a laser beam, the powder is carefully sintered according to the specified geometry pattern provided by the CAD file mentioned above.

Different scanning tactics are used in this rapid prototyping industry, with this process referred to as scanning by the laser. Currently, printers with numerous laser beams shorten the time needed for scanning and, as a result, printing.

After a layer has been laser scanned, the next powder coating is deposited and layered using a roller or even a blade. The laser will then scan it once more, fusing the second layer of powder with the layer before it.

The duration of construction and resolution of the final result are both impacted by the layer thickness, which is constrained by the specifications of the machine and defined in the STL file. Nowadays, most metal printers can withstand layers as thick as 0.04mm.

The actual process, known as sintering, is identical to other sintering procedures, except that, in this instance, the sintering is carried out layer by layer on a considerably smaller scale. In contrast to the traditional sintering process, the powder is mainly free-flowing and not subjected to high pressure.

Each model is constructed layer by layer since the material is powdered, which results in what is called necking between adjacent powders. This is what fuses them together. SLS permits numerous material printing processes because the sintering process is carried out one layer at a time. Therefore, a layer after the first one can be made of a different material provided it fuses with the previous layer.

The finishing process is fairly simple compared to other techniques. Because the powder is evenly distributed throughout the print area, the print model self-supports to a certain extent. This reduces the need for complex support removal post-processing processes and saves time and money.

However, the 3D printed product must also undergo cooling post-processing once it is removed from the printer in order to fully complete the sintering process. This boosts the product's durability and other mechanical characteristics and makes it immediately usable. The unused powders can be removed and used again for another build. Compressed air is one way to clean the parts before use.

As can be seen, the finishing stage of the selective laser sintering process is fairly simple compared to other 3D printing technologies. However, it is worth noting that although support is not needed, there is a need for a cleaning procedure to ensure that the sintering is as it should be and that the process is completed.

Once finished, there are various typical uses for selective laser sintering, such as:

With SLS, formerly believed unattainable complicated designs and pieces are being reinvented as efficient, interconnected structures. This is how selective laser sintering parts are some of the best for various production applications and prototypes. There is quite a lot that goes into the sintering process. Furthermore, there are bound to be additions and improvements that will make SLS even better.