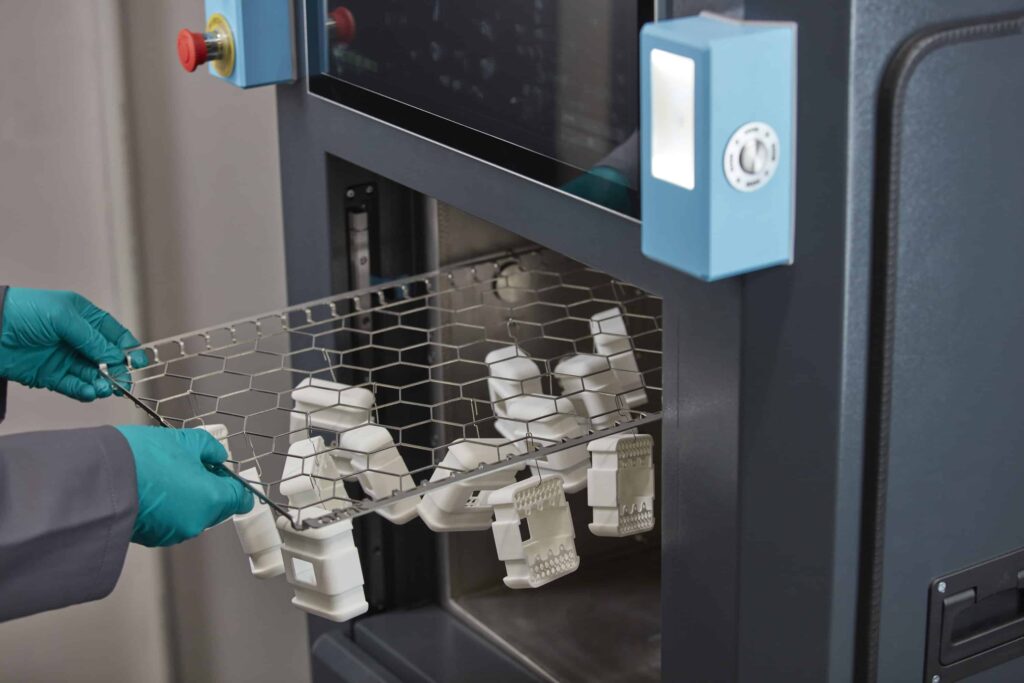 Suppose you have a new idea for your first product but aren't sure which 3D printing technology to use between stereolithography and selective laser sintering.

It isn't surprising as both are some of the most highly praised 3D printing methods.

Both the stereolithography and the selective laser sintering 3D printing methods are widely used and with good reason. They both have their own features for different uses and are helpful in many ways.

Here is all to know about the stereolithography and selective laser sintering processes and the main differences focusing on the materials and the finishing.

Stereolithography has been around for years. In fact, it was one of the very first manufacturing processes, and it is still improving. The process of stereolithography (SLA) is one of many ways to make 3D-printed items. It's how a stereolithography apparatus, a specially created 3D printing device, turns liquid plastic into a solid.

More than 50 different additive manufacturing techniques, also known as 3D printing, are utilized for various materials, including plastics, metals, sand, etc. An SLA machine begins with a surplus of liquid plastic. Some of this liquid plastic is cured to make a solid object. Interestingly, these machines don't eject ink or another substance like conventional printers.

SLAs consist of four major components: an ultraviolet laser, a perforated framework situated in the tank, a tank where liquid plastic, photopolymer, can be filled, and a computer that controls the framework and the UV laser.

A liquid substance known as a photopolymer is subjected to either a digital projector, laser, or any directed optical light source during the SLA process. Where the light reaches the material, it solidifies as a result of the radiation. Once fully drawn, the plastic object is taken out of the tank containing the liquid polymer.

Essentially, the first thing users do in the stereolithography process is add support to their 3D model. This is imperative as the liquid plastic cannot lend support during the process. The data is then sliced into very thin layers. The UV scanning laser is then used to draw out each layer, one on top of the other, curing the resin into a solid plastic 3D product.

Unsurprisingly, stereolithography is pretty fast and incredibly versatile as there are many resins users can choose from that offer different mechanical properties. Even glass fibres or aluminium can be added to gain greater strength. Here are the different grades that resin is usually divided into:

The selective laser sintering process is vastly different from the stereolithography process mentioned above. And although it wasn't one of the first to be innovated, it has made a name for itself and is already well-known in the 3D printing industry.

The essential components of the selective laser sintering system are the power bed, laser system, rollers, and blades for the spreading system. The laser system is comprised of a laser as well as a scanner. The laser beam must be concentrated on the powder particles laid out on the surface so they heat up and melt.

The process begins with the 3D CAD data being split into thin cross-sections or layers. The SLS additive manufacturing machinery receives the data after that. The creation of the first layer begins here. A leveling roller within the build chamber spreads the powder thinly over a surface. The material's cross-section is traced using a CO2 laser.

The laser generally easily raises the temperature of particular sections of the material surface as it follows the model to harden a part. This is because the printer has already preheated the material to a temperature slightly below the melting point.

The powder is heated to just below or precisely at its melting point as the laser tracks a cross-section of the model. To make an individual, solid portion, the particles are mechanically fused together as the scan takes place.

The loose powder acts as the part's support during printing and does away with specific support structure requirements. The powder bed gets lowered, and the process is repeated until all parts are created.

Selective laser sintering has many applications:

The Differences Between Stereolithography And Selective Laser Sintering

Although they are similar in some ways, like how they both use laser and print 3D products, they are vastly different. Here are the differences to be aware of between stereolithography and selective laser sintering.

3D products are further constructed from these polymers. On the other hand, a laser is used in the additive manufacturing technique known as selective laser sintering to fuse together powdered materials to form solid structures.

SLA and SLS have a few key differences, one of which is material uses. Instead of using metals, SLA uses resins and polymers. SLS can process metals like titanium, steel, and other metals in addition to several polymers like nylon.

Furthermore, since SLS deals entirely with powders, there are safety concerns that users do not have to worry about with SLA as it does not deal with any form of powders. This is because these powders can become respiratory hazards if not handled well.

Each liter of SLA liquid photopolymers costs between $70 and $110 or more. In contrast, costing somewhere around $400 and $700 for each kilogram, SLS powders are much more costly and might be challenging to even find.

Nevertheless, some business analysts claim that the current boom in the SLS industry has increased availability. Interestingly, in the end, there is a low cost per part for selective laser sintering compared to stereolithography products.

Both 3D methods employ lasers, although they do so at various wavelengths. As previously indicated, epoxy is cured within a resin using SLA lasers that work in the UV spectrum. Depending on the manufacturer, it has a tank of liquid material and a point laser that emits a laser with a very particular wavelength.

To compress and sinter metal particles, SLS uses stronger lasers. As a result, SLA can be utilized at lower peak powers. In contrast, SLS often demands significant peak powers to compress metal particles. There is also a difference in both these 3D printing technologies' sizes. SLA printers used are usually smaller. SLS printers need a lot of power and a lot of workspaces, which explains why they take up more space.

Furthermore, larger models can be produced using SLS than by an SLA machine. The reason is that their small and lack of need for support structures means they can do more than what SLA machines can.

With stereolithography, a UV laser is used in SLA to harden a photopolymer resin. The liquid polymer in the vat reacts with the wavelength, solidifying it, and the laser essentially draws each layer. After each layer has hardened, the machine's build plate is raised or lowered to help cure the next layer.

The laser then draws it. When ready, the part and its required supports are removed from the platform and placed in a UV chamber to complete the curing process. This is imperative as the parts need to be thoroughly cleaned, and post-curing needs to happen to ensure maximum strength and stability.

Laser-sintered nylon powder is used in SLS to make the required parts for end products. Since the powder bed serves as the support framework, no supports are necessary. To finish, users must simply get rid of the metal particles clinging around it.

There is also a difference in the features that each of the materials used produces. In comparison to SLS, SLA typically creates smaller and more recognizable features. Smoother surfaces and more detail give SLA a better overall appearance. But it does depend upon the specific part.

Since SLS utilizes powder as a sintering medium, which results in uneven surfaces, it is unsuitable for fine details. Furthermore, the surface finish is rough around the edges. Therefore SLA is better at feature detail and a better surface finish. This is also because the SLA is surface treatable, while SLS is not surface treatable.

Generally speaking, SLS is presently the better technique for producing end-use parts because the components are usually stronger and experience less UV deterioration, and SLS machines have higher throughput than SLA machines.

Choose SLA if you want highly smooth parts. SLS will be a better option if you desire a more robust part. SLA is preferable to SLS if the porosity is a concern.